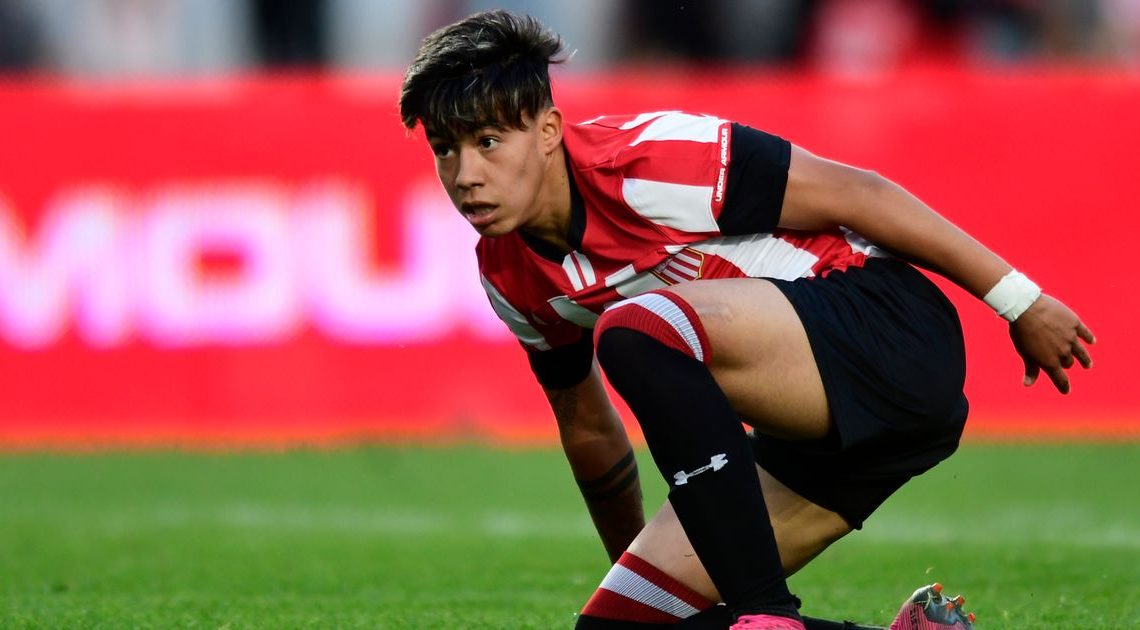 Manchester City’s latest South American prospect Dario Sarmiento says as soon as he heard of the Blues’ interest, that was the only club he was going to sign for.

Sarmiento, 18, sealed a move from Estudiantes to City in April for a reported initial fee of £5.2m. Estudiantes also have a 20 per cent sell on clause for the winger.

The Argentina youth international was the second-youngest player to make a debut for Estudiantes when he went on as a sub against Huracan in 2019, aged 16 years and seven months. He played 21 times for their first team, and will link up with City this summer.

Now, Sarmiento has spoken of his decision to choose City, above reported interest from Barcelona and Real Madrid.

Sarmiento says he was unaware of any other specific clubs vying for his signature, but that would not have changed his destination regardless.

He told Marca : “The truth is that I don’t know [of any other clubs interested], but as soon as they told me the real possibility of Manchester City, I did not hesitate, it made me very happy and I didn’t want to hear anything else.

“My representatives, Facundo Fraga and Luciano Galletti, told me that they were following me, that they were going to come to see me at a game. That undoubtedly gave me a lot of strength to continue working day by day and motivated to continue improving in my career.

“I trust my representatives a lot and I stay out of all that. I know they came to see me play, then I had some talks with them and now I’m excited to be able to travel and start this new experience at Manchester City.”

Given Sergio Aguero’s status in both Manchester and Argentina, Sarmiento was inevitably asked about the new Barcelona player, as well as working under Pep Guardiola.

“Agüero is a club idol, top scorer and the most winning player in the club’s history,” the teenager said. “I would have liked to share moments with him so that he could transmit all his experience to me.

“We have not spoken yet, surely now that the competition in Europe is over we will. I really want to learn from [Guardiola], pass on all his experience to me and improve by his side. He is one of the best coaches in the world. With Aguero the same, although now with his signing for Barca he will be a little busier. We will talk.

“I love how [Guardiola’s] teams play. He is one of the best as I said and I am looking forward to putting myself at your service.”

Sarmiento also spoke excitedly about sharing a dressing room with some of City’s best players, but couldn’t pick out one player who he is most looking forward to playing alongside if he reaches the first team – although he did express hope that Lionel Messi could still arrive at the Etihad.

He said: “They are all great players and being able to train and share moments with them will be very important to me. I couldn’t be left with just one or two. Manchester City is a top team in all its lines.

“Of course I would like to [play alongside Messi]! In the end, having the best in the world on your team is always a pleasure but it doesn’t depend on me and now he’s at FC Barcelona.”

For now, Sarmiento is likely to be sent out on loan to one of the City Football Group’s many sister or feeder clubs, as he will not qualify for a work permit at the moment, not being a full international.

A right-winger, 5ft 6in tall, who favours his left foot, Sarmiento has drawn the inevitable comparisons with Lionel Messi, due to his close control, and dribbling ability.

It is said that former Argentina manager Alex Sabella – a former Sheffield United and Leeds player – sank to his knees in praise of the teenager after some dazzling performances at junior level for his country.