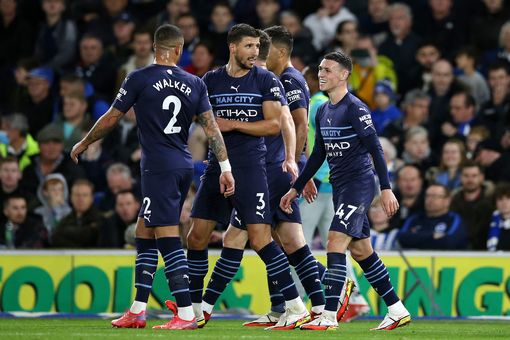 Manchester City produced a scintillating first half performance at Brighton to keep up the pressure on Premier League leaders Chelsea.

City were beaten at Brighton last season in their penultimate game, having wrapped up the title, with Joao Cancelo sent off early on. The Seagulls have started this season well and started Saturday’s game in fourth, one place behind City, after eight games.

Pep Guardiola warned of the threats Brighton can offer his side, naming a strong side at the Amex Stadium including the returns of Gabriel Jesus and Ilkay Gundogan from the win in Belgium in midweek. Raheem Sterling was not in the squad after picking up an injury in the build-up, which Guardiola put down to ‘niggles’.

City didn’t need Sterling, though, taking the lead early on through Ilkay Gundogan, before Phil Foden finished off a brilliant break to make it two. Foden then deflected in Gabriel Jesus’ effort to make it three before the break as Brighton were helpless to City’s attacking threat.

However, the hosts were much improved after the break, pinning City back and getting a deserved consolation from the spot through Alexis Mac Allister after Ederson brought down Enock Mwepu. City, though, comfortably held out for victory, adding a fourth in injury time through Riyad Mahrez, and could stay in second place if Liverpool drop points against Manchester United on Sunday.

Follow below for pre-match build-up, live match updates and post-match reaction from the Amex Stadium.

Guardiola’s praise for the Premier League

Pep Guardiola loves the Premier League at the moment.

“It’s my sixth season, every season is stronger than the year before. Top managers, look at Graham The clubs, teams, every manager the sense. Arsenal is growing, one game a week and they will be there, Chelsea of course, Liverpool, United. Many top clubs. That’s why it’s the best league in the world, be proud to be living these years in your country. It’s a privilege.

“[The other managers] make me better, that’s for sure. I tell you how many times thinking how to handle Liverpool and with Thomas Tuchel again, and every time against Mikel, this game. Every manager has this trick to make you think how to beat them. After you win I’mcongratulated and after you lose congratulate them.”

More from Pep’s interview with Sky on why he loves Phil Foden too much.

“I like Phil in every way. I like Phil for the fact he knows to play football, we can have an extra man in the positions we want to play, to pass the balls you have certain areas have more players. He has the qualities to do it, the first control and have the ability to dribble.

“He’s so aggressive attacking 10, 15, 20 metres to the defenders. He scores two goals but he could have scored more, the last games not scoring. He has three, four man-to-mans against the keeper but the decision isn’t perfect. He’s 20 and can improve.”

Guardiola’s tactical analysis of the game

“It was really good, we know exactly which team we faced not just for the results but the way the play is similar to last season, this season they are more effective. A good lesson for half an hour second half they were better than us because this game must be played with the ball, when you don’t have it anything can happen. We suffer, maybe it will be good for us. It doesn’t matter the circumstances, we have to play.

“The first half, first five mins of second and last five minutes is what we have done. Middle of the second half they were better, they changed their setup, play with a diamond and we didn’t adjust as much as possible. a huge victory for us, this is a stadium and the way they pay is a big compliment for the team.”

“We win the game because we have good players, don’t estimate too much the decisions the managers. We saw what they do, we figured out maybe we have the space because when they play man to man they have one man free just the keeper. They are incredibly aggressive, when the passes are more than 5-10 metres they win it after. Most importantly when they have the ball they know exacly what to do, not just defend well and after channels. They occupy the space really good. That’s why you have one more man in the middle, they occupy pockets well, know the spaces, they make runners from outside, highs and wide that not allow the fullbacks.

“They have all the mechanisms of a big team. I know it from playing against Swansea when Graham was there and last seasons, always they try to play, I admire for that. Not a top four team but they play like it. That’s why they know how difficult it is and a big compliment for our team.”

Ederson After an idle first half-hour, he had plenty of saves to make, but was rash for the penalty 7

Kyle Walker Got a verbal volley from Dias for one slack piece of defending, but he was generally sound 7

Aymeric Laporte The first passer in so many of City’s best moves, and his defending was good enough, too 7

Joao Cancelo his link-up with Grealish is a growing feature of this team, a superb attacking outlet 7

Rodri One sloppy pass in the first half brought groans, but he bossed the game for long spells, a powerful pivot 7

Phil Foden, speaking to Sky Sports, admits the second half performance from City was poor, but praised City’s tactical work in the first half.

“From the start we looked very good in possession, we controlled the game. Sometimes when you’re 3-0 up you can drop the level. We’re disappointed with the second half, the level wasn’t the same but we dug in there.

On his central role, Foden said:

“I’m enjoying it. I can drop deep and get on the ball, get the passes off. It’s a new role and I’m enjoying it. It changes game to game, sometimes I stay higher than normal, this game because they go man to man, the aim was to drop in and get the ball as much as possible. We used the extra man well when I dropped to control the game.

“We’re in a good run of form, you know what the manager’s like, we’re going to keep going the next games and keep the level. I’ve not had chance to be in the changing room. I’m sure he’ll tell us we can be better, we know we can be better. It’s something to work on.”

Give each City player a mark out of ten and see how other fans have rated the players.

This widget requires javascript to work.

Choose your Man of the Match

Phil Foden got two goals and an assist, but there were great performances from Jack Grealish, Bernardo Silva, and Gabriel Jesus among others.

There’s the full time whistle, City managing the ball brilliantly after that Brighton goal to hold out for a 4-1 win, with that Mahrez goal the cherry on the cake.

The second half performance failed to reach the electric heights of the first half, but City did what they needed to win the game.

Goals from Ilkay Gundogan, Phil Foden and Riyad Mahrez secure a win to send City second. Manchester United could help them stay there if they take points off Liverpool tomorrow.

Well that caps it off!

Brighton mess around with it in defence, Phil Foden wins it back, plays a one-two with Fernandinho, and finds Riyad Mahrez in acres of space to take a touch and fire home.

Phil Foden has another effort dropped, as the referee signals five minutes of added time.

Phil Foden gets space in the area, albeit from an angle, but Robert Sanchez denies him his hat-trick from a poked effort.

That goal was very much deserved from Brighton and now City have work to do to see this game out.

Dias may claim it was soft for the free-kick that led to the penalty but he shouldn’t be shoving people over in that area of the pitch.

Ederson is booked for taking too long over a goal kick.

No offside, penalty given.

Substitute Alexis Mac Allister steps up and scores despite a touch from Ederson.

It looks clear cut, but there might be an offside in the build up.

Mwepu gets to the ball just before Ederson and goes down. Penalty.

​An important 20 minutes ahead for Fernandinho off the bench. He has been brought on to shore up games over the last few years as Rodri has taken over as a regular starter, but the veteran has struggled this season to get up to speed. ​

​Bringing him on should make City more secure, but it will depend on how Fernandinho plays.​

Another sign that City want to regain control of this one, as Fernandinho replaces Ilkay Gundogan.

Pascal Gross comes off Alexis Mac Allister is on.

Adam Lallana catches Ilkay Gundogan late, and then his protests earn the attention of the referee. A combination of the foul and reaction gets him a yellow card.

Brighton and their fans are getting frustrated at some of Kevin Friend’s decisions, and City are starting to slow the game down to stop the Brighton momentum.

It seems odd to say it at 3-0, but the next goal feels crucial here.

Brighton have the momentum behind them, the crowd are backing them, and City don’t seem as composed as they were in the first half.

A fourth goal would end their threat, but Brighton would fancy their chances of another if they were to score soon.

Brighton are having an excellent spell here and City need to be careful – especially with Cancelo joining Walker in the book.

The home side will remember how well they came back from 2-0 down here in May and City can’t afford to give them any sniff of a comeback.

Moder gets a booking for hauling down Rodri.

Joao Cancelo clatters into Tariq Lamptey just moments after he made his comeback from injury, sending the full-back spinning in the air. It looks worse than it is, but it’s a clear booking.

‘Dirty Northern you-know-what’, is the chant from the home fans. Do they not know he’s Portuguese?

Ederson produces his best save yet from Trossard’s fierce drive.

Brighton are coming out a bit more in recent minutes, with Leandro Trossard striking one well but straight at Ederson.

Tariq Lamptey and Enock Mwepu are on for the hosts. Dan Burn and Neal Maupay off.

Ederson pats down from Pascal Gross, and just avoids conceding from the rebound as he collects again.

Guardiola was asked in midweek if that was the team’s best performance in a while. This is better.

City are so dominant Brighton have just been beaten in every single department so far.

In Bruges, the manager wasn’t happy about the way his side tailed off at the end of the game. All eyes on them in this second half then to see if they can keep up their standards for longer.

No letting off for City